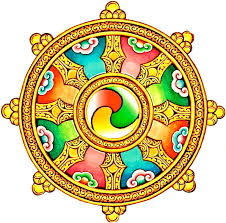 Part 4 of “How Do You Qualify Yoga”

Please let me forewarn you, this may be a polarizing post.  Humans, on many levels, enjoy their misidentification with nonself (to borrow a Buddhist term).  We cling desperately to all that we are not–all that we are attached to.  The ego is a collection of false identities, which the teachings of Yoga systematically deconstruct.  The ego gets particularly obnoxious when we perceive we are being told that we are doing something “incorrectly” (or at least differently from how it was intended).

Dharma is a Sanskrit term which is utilized in many traditions; however, it has no true English translation.  Dharma can mean, law, right-way, and order; Feurestein ascribes it to morality.  Jainism, Buddhism, Sikhism, and Hinduism are all called “dharmic traditions (or religions)”.  Truthfully, there really is no “religion” called Hinduism.  Hinduism is a term that originated from the British trying to describe the various traditions of the people Sindhu River.  Hinduism is a collection of philosophies, among them: Shaktism, Vaishnavism, and Shaivism–all of whom, like the branches of Yoga, describe the Ultimate Reality in different ways.  Sanatana Dharma means the “Eternal Way” (or law, morality, etc.).  It is the wellspring out of which the dharmic traditions sprung.

Yoga and Sanatana Dharma cannot be separated.  Their lines are intrinsically blurred.  While it’s possible to practice Yoga and still adhere to other religious tenets–Christianity is very much a Bhakti Yoga practice–the origins are one and the same. Conversely, it is possible to be a Hindu and not practice Yoga; however, they originate from the same source.

All types of Yoga (not mere asana practice), have a dharmic component.  In some paths the tenets are spelled out in recommended actions and restraints.  In other paths, there is a call towards looking inward towards ones own moral compass.  Regardless, there are no Yogic recommendations towards: competitiveness, hyper-sexuality, greed, or lying.  However, that is often the case in the contemporary Yoga scenario.  Studios are selling expensive clothing, hyper-mobility is lauded, scant dress is praised, and teacher’s don’t have a personal sadhana.  It’s not a judgement, you aren’t bad if you’re doing these things.

Yoga is not about a punitive deity waiting to judge–it’s about becoming so clear and so aligned that you wouldn’t want to do these things.  Patanjali calls this the “great vow”.  It is not about becoming pious either; but, there is nothing wrong about being aware of what Yoga is and is not.

Follow From the Gross to the Subtle on WordPress.com

From the Gross to the Subtle